I managed to cycle to Hamptonne – a Jersey Heritage collection of restored buildings – a very much smaller version of the Wield and Downland museum at Singleton Sussex. I have not seen a Skep before; they used to farm bees in them. I did wonder if anyone does this now. I have since learnt that this method was common on the mainland. 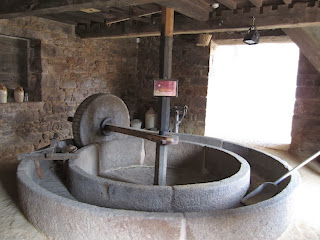 They still use their apple crusher as part of the usual cider making process.
If fact they grew an orchard on the site to feed this monster. It was driven by a large cow, being Jersey!

The shovel (one piece of beech) was used to transfer the crushed apple to the press. 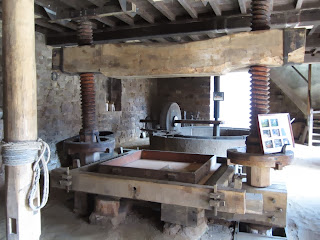 This large press has twin screws; they think that this is the largest working press of its type to survive. The base of the screw is similar to a ships capstan. I presume the screws were turned originally on a very large lathe. They do have water wheels on the island and they may have used them for power. That must have been some thread chaser, they were perfect. 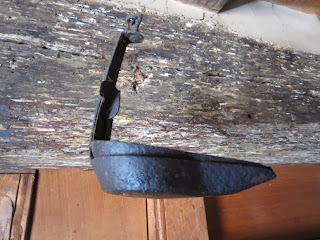 This hanging oil lamp was traditionally filled with conger eel oil (eels being part of their diet).
They wanted to recreate the atmosphere inside the building by using these lamps, but apparently the smell is so awful they decided to keep the visitors and not to light them.

The lamp is in two parts. The first was fixed to a beam or wall – the right hand picture. The second fitted inside the first so it was possible to refill the lamp without removing it from its fixing. Apparently the Romans used similar lamps.
The lamps were only used downstairs (potential fire risk) as the roof was thatch. This last image was to show a local design of sundial which can be seen all over the island.


The dial is made of local stone and the pointer from iron.
Perhaps the design was based on a wheat sheaf.

Just a quick note just to let you know that I am experiecing technical problems with my new laptop and Windows 8. Blooming thing will not let me upload pictures. I have written all my visits sibce July but have failed to getthem on the blog.
Posted by Unknown at 05:58 1 comment: