Email ThisBlogThis!Share to TwitterShare to FacebookShare to Pinterest
Visit to Magnus at Wimpole Hall 22-03-14

Unfortunately Magnus has not been too well recently, but this did create the opportunity for me to go up to Wimpole for some more one to one tuition. I was given a large piece of bus spring at my blacksmithing class recently. This is no EN45, it behaves like an alloy steel with all sorts in it, and is also 4”x2”in section in the middle then only really 1/1/8” at the ends. When cut it has a mirror finish. I had already formed a slim handle socket and a straight blade. I wanted something more traditional with a beard and bigger socket. 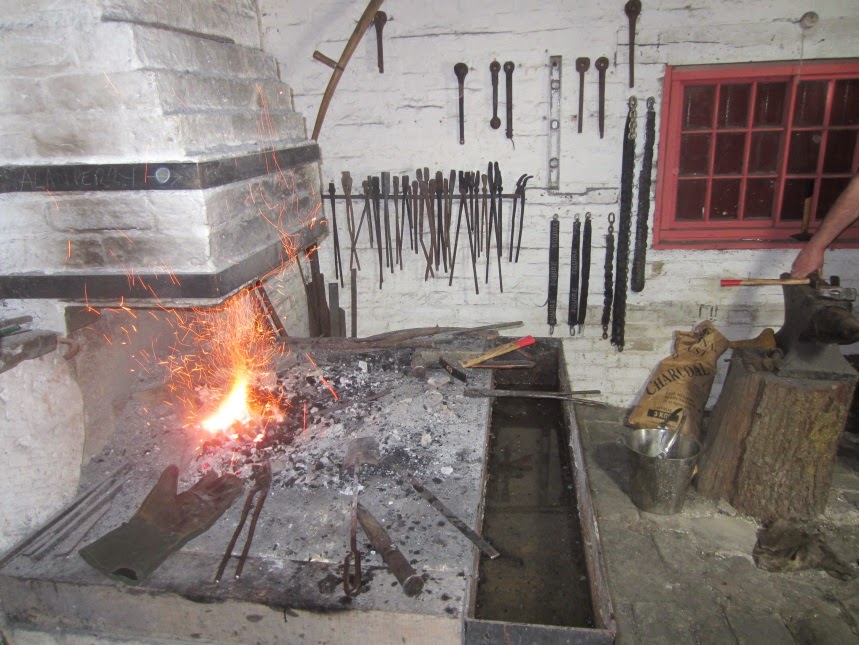 This forge at Wimpole was built in 1790. Loaded with charcoal it was so much easier to use than coke or coal.


Someone ordered coal by mistake at my blacksmithing class in Forest Gate Once, now that proved interesting – red faces and lots of fumes. 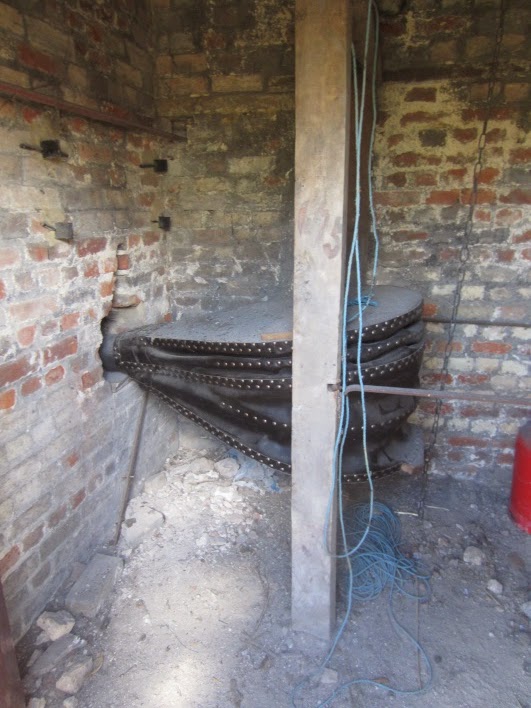 Back to charcoal - the fire (once lit) only requires intermittent pumps from the giant bellows to keep it going. Less chance of overheating, less carbon loss, less noise but expensive on bought charcoal. However small charcoal is even better and may be bought from a maker for very little.

My latest axe head, I want to make beards! 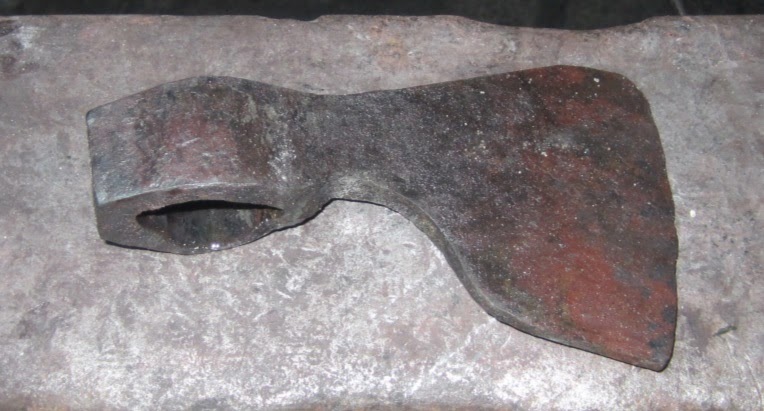 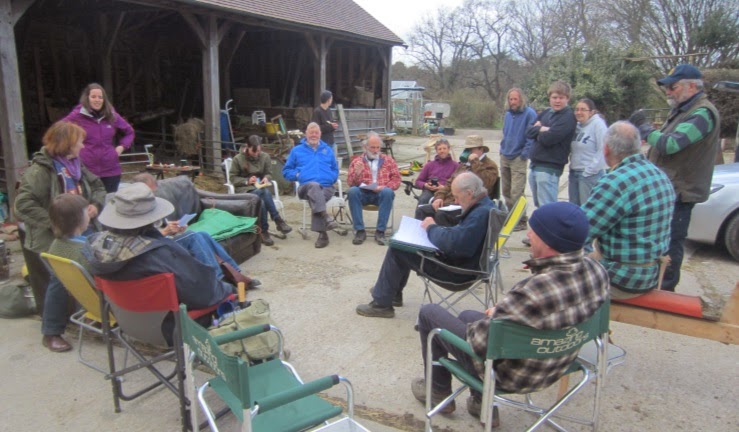 The first meet of the season was very well attended. They stopped half way through and held a Ball planning meeting – they take things very seriously in Sussex. Everybody you see is volunteering during the weekend! They still require many more however – contact Mike Gordon.  Thanks for the venue Mary. 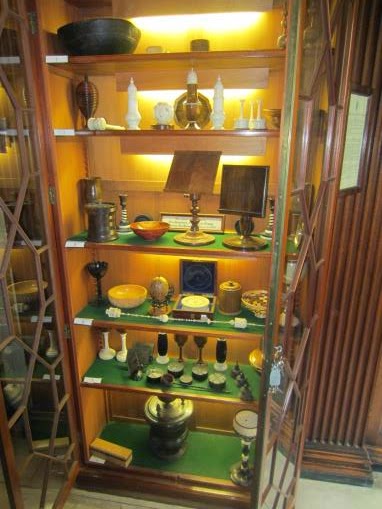 I was delighted to be invited as a member of the Howe committee and as chairman of the APTGW. This has not happened before,  previously only liverymen were allowed to attend. I was in good company with Masters of the Needle makers, blacksmiths, upholders, spectacle makers, secretaries, curriers and fruiterer's, to name but a few!  The venue Apothecaries Hall is fabulous, stuffed with everything you could imagine of a worshipful company with a history back to 1672. 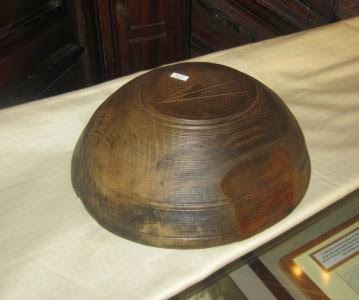 Perhaps not as old as the turners however who gained their royal charter in 1604: but then like so many companies their origins go back even further, the turners to 1179. 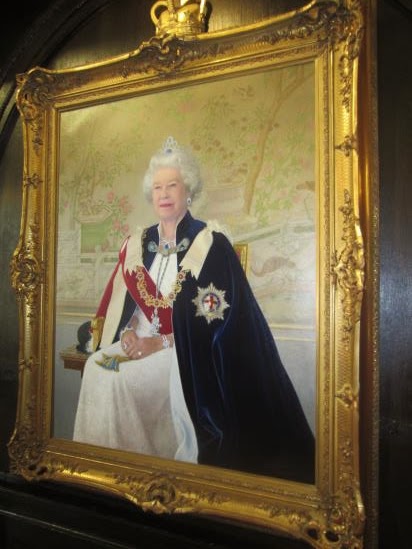 Amongst their many great portraits of former Masters (most of which were life size) I found a really striking portrait of our Queen. 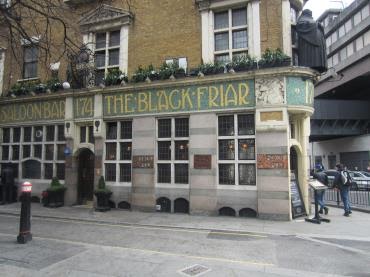 We enjoyed a less formal chat in the Black Friar afterwards.  The pub was saved from demolition by Sir John Betjeman. It was built on the site of a Dominican Friary at the turn of the century.  Apothecaries Hall was burnt down during the great fire and was rebuilt as it is today.
Posted by Unknown at 01:10 No comments:

This meeting was hosted by ‘Bardster’ who lead the leather working meeting at White Chimney Woods last year. On this 'spoon' day there were members of the APTGW, the Facebook spoon group, some bush craft folk and Kent hedge layers! Now I do not subscribe to the use of facebook, but maybe it does have some good outcomes. 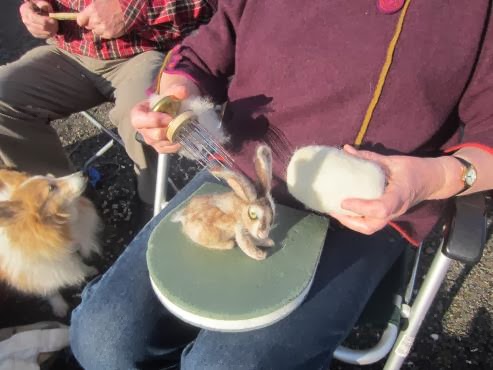 Carol Lenard was needle felting, something I have never seen. The process which involves an array of very sharp needles consolidates wool into a solid mass similar I guess to felting. In fact some of the objects made are a combination of the two processes.

This rabbit had  huge feet and ears, well OK it was a hare. 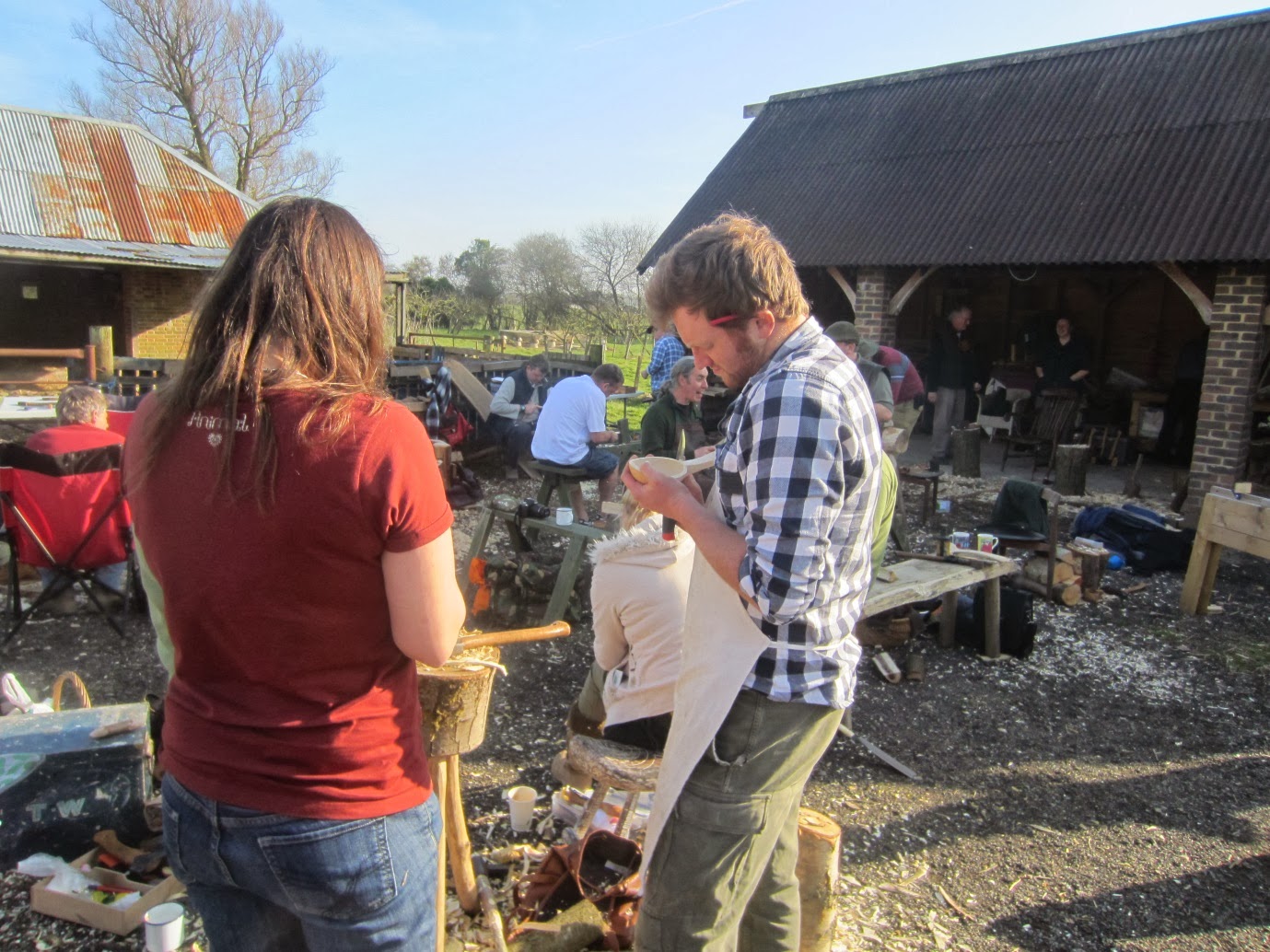 Tom Standon (most promising Kent hedge-layer of the year).

For someone who lays hedges he is a very good spoon and treen maker. 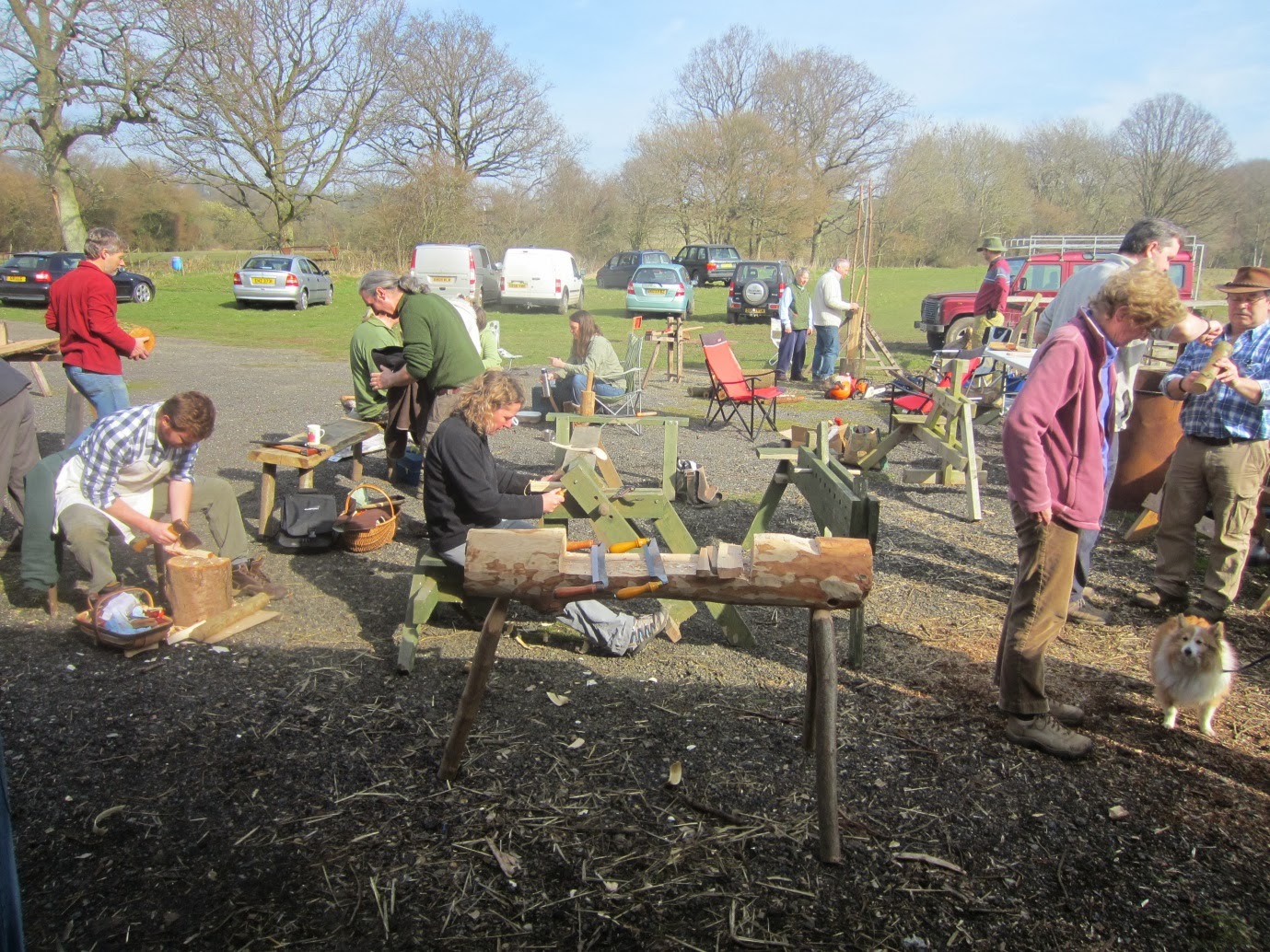 It was that first real sunny Spring day of the season. The hard standing area was small which compressed everyone into a cosy working group; this promoted a lot more interaction than usual, something perhaps  to bear in mind at your next meet. It also makes it more convenient to borrow tools – thanks Harry.

Once again and a big thanks you to ‘Bardster’ our host who not only made us very welcome but introduced a few potential members.
Posted by Unknown at 04:26 No comments:

I have been playing with an axe handle and case for Magnus (Wimpole Hall blacksmith). 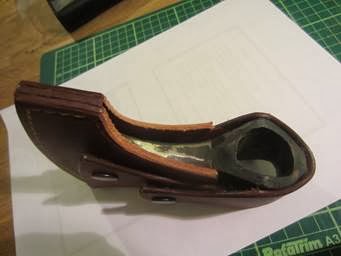 Every was going well until I had to resolve the design of the last component. Should I laminate it or try and wet mould from one piece? 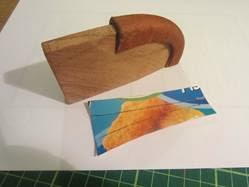 The wet moulding won. However I did have to make a fairly accurate mould first. Then a soak overnight.

Pushing it into shape was a lot easier than I thought. Then a few plastic spring clamps to hold it in position. 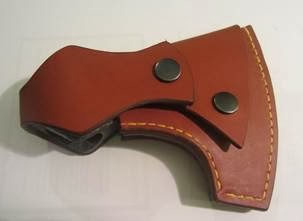 The nearly completed case.
Maybe some surface decoration if I can convince myself it would add to the design. 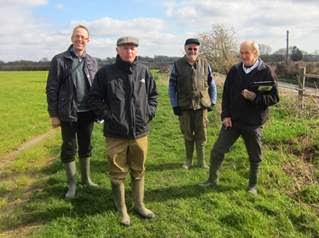 It was a beautiful day to visit the site of the next Ball. Not that you need reminding but – 9/10/11th May
Considering the rain so far this Winter? The ground was fairly dry and solid.
This venue has great potential and the organisers have thing well in control. If you wish to volunteer then contact Fionn or Mike from the Sussex group.

ADVANCE NOTICE
The Worshipful Company of Turners will be running their prestigious biennial Turning Competitions at Apothecaries Hall, Blackfriars Lane, in the City of London
on Tuesday 28th October 2014.

WCT Competition for members of the APTGW – to produce a three legged stool.

Please note this is a pole lathe competition.

The prizes will be awarded on the afternoon of 28th October by Lord Mayor, Alderman Fiona Woolf.
On 29 October there will be an exhibition of the competition entries open to the public and available for sale if the owner wishes. The competition pieces should remain on display until 4pm on 29 October.
Posted by Unknown at 00:43 No comments: