Sunday 22nd April with the Lathers at Wimpole Hall 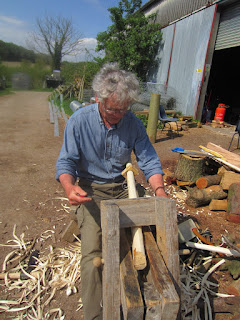 This is Jim the ex-bowl maker come chair maker! – shaving legs of course. 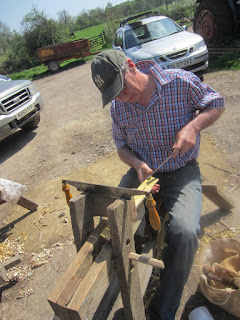 Shane was making a handle for a very large gougey thing from some a troublesome piece of Mulberry using a home made file ‘o’gouge.

Rightly so he resisted my comments about wood suitability and tool being ground on the wrong side!

Great to see him and Jayne again – must be a year!


This reminds me of a well used comment from power lathe turners  - which is never to use an old file to make a tool from (probably because as files they have not been tempered and would be too brittle).

Well a few years ago my good friend Gabor managed to get his old friend Bill Jones to do a demo at Fairlop woodturners. What a charming man - 5th generation bone and ivory turner (had posh clients - elephants were not scarce then). Anyway during the half time break I had a good look at his tools - most were made from files apart from one gouge by Holzapffel from 1840! - bit of a contrast!

Simon was giving me some very good ideas re burning and brushing and oiling.

Mick the hurdle maker turned up later on and hope to see him at the Ball.