Christmas in Wanstead
I was given a Kindle Fire for Christmas so decided to make a protective case for it and my phone. 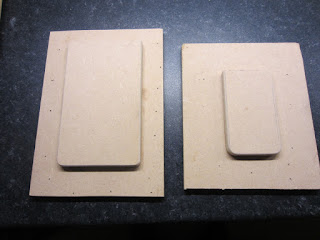 I started off by making MDF moulds of the two items and then moulded the leather using the Stohlman method, sweating the leather after soaking really made a difference.

I used steel tacks and kept them in the waste area as they stain the leather – as you would expect. 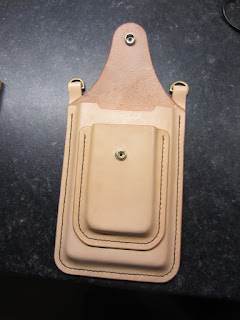 I stuck the top moulding first using Evo-Stik Impact. For smaller items I have experimented with Power Pritt which has been working well and grabs quickly especially with pressure.

It was tricky to hold them in the stitching pony and spent most of the time just between my knees. 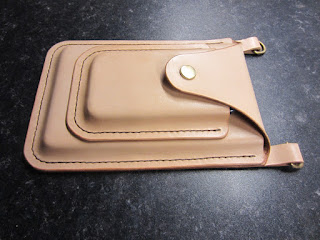 I am also still using pre-waxed thread as it tends not to tangle when pulling through. For the edges just gum and then plenty of carnauba cream all over to finish (sounds like a dessert).

As with many wet moulded cases, they would be expensive in time to make, I suppose they could be jigged and put into a press and even riveted instead of hand stitching.
Posted by Unknown at 10:28