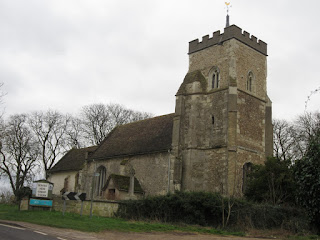 En Route to the venue 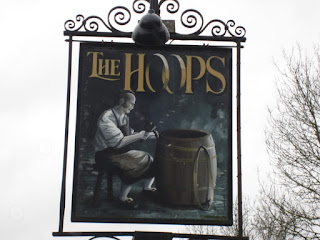 Great sign – never come across this pub name before – many Coopers Arms but not hoops.
Open by 1837, closed in 2005, yet as recently as 1989 it was described as ‘the epitome of a thriving village pub’
The lounge, in an elegant and restrained fashion, points to the age of the building. It dates from 1680 and its original centrepiece is a fine Jacobean fireplace, supported by a plethora of beams and a flagged floor. (Roger Protz, 1989)
In 1905 it seemed to have a resident Tory-hating dog:

“Albert Clark told the court that in November a political meeting was held at Great Eversden and afterwards he went to the Hoops public house. A man in front of him clapped his hands and called out ‘Good old Tory’ at which the landlord’s dog flew at him and bit his thigh. He was laid up for 17 days” (Mike Petty, Looking Back)
The pub sign shows a Cooper at work with the hoops used in barrel making:

There are two other pubs nearby named the Hoops; in Bassingbourn the sign also depicts barrel making but in Barton the sign shows three hoops, perhaps those used in the game of Quoits. The phrase ‘cock-a-hoop‘ may also have connections.

However, the origin of the pub’s name may instead refer to the ’18th century nickname for Bullfinch’, a bird whose numbers are now in rapid decline but which was once considered so destructive to fruit crops that money was offered for each one ‘destroyed’.

Some fun thatched ridge adornments on one of the village houses.

The only other occaision when I have observed this process axes and billhooks were used to do the initial cutting. Field maple looked like hard work – hence the chainsaw. 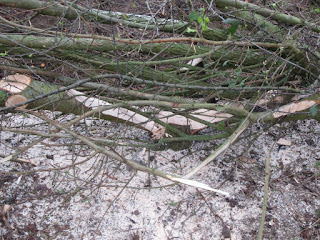 This maple was split in both directions to make up for the big gap in the hedge.

Once a Hawthorne hedge is now mainly Field Maple due to weed killers being tree killers.
Maple is brittle and often breaks – not as forgiving as Hawthorne and also thorn-less.

That works both ways – less bird food and not so much of a barrier to livestock. 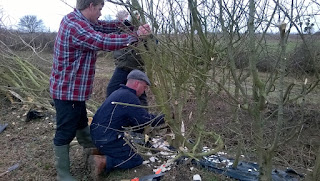 This trio were overcoming various medical issue to work as one! 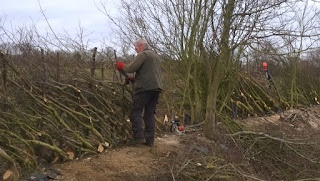 Back to the principles – the hedge is cut and laid – normally in one direction, unless someone has forgotten to remind everyone which way! 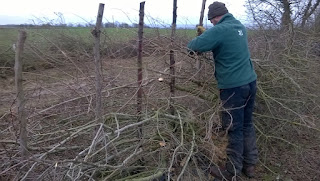 The vertical stakes (forearm width apart) are then fed through the larger elements of the laid material. Simon was using Elm stakes as he has an Elm coppice which can grow 5’ as year. 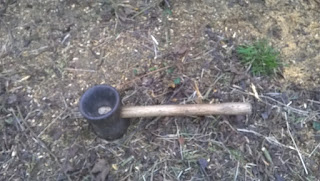 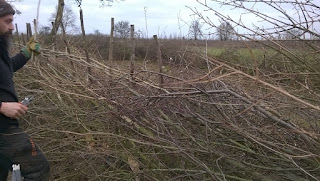 Shepard’s mallet – great for hedging stakes, does not split and burrs over the tops.

The laid material is pushed down and the binding is woven across the top. 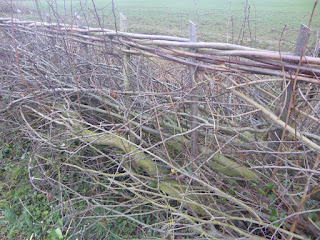 The bindings have been levelled to produce a crisp horizontal line. Plenty of material below to form an impenetrable barrier – if it is too thin, the cuttings from the intial trimmings from laying are added to make it a bit of dead hedge as well. 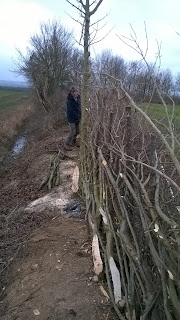 Some styles of hedge have no brash on one side (no stock) and some have it on both (stock both sides). The brash stops the stock from eating the regrowth. 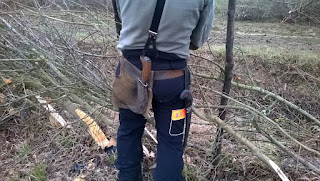 Recently I saw a leather case for a billhook so I was interested in what these lads were using. 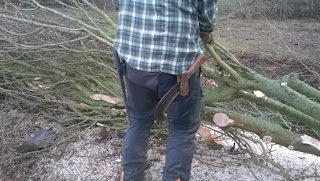 This southpaw was wearing what looked like a wooden hook. Note styles of hook!

The quickest hedge layer however carried no tools or a fancy billhook case on his person and his work area was noticeably very tidy – not sure what that says, 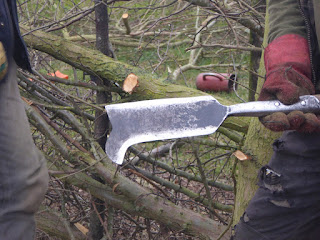 This billhook had a notch which was used as a fulcrum for bending laid material into line when laying and staking.


Lunch at the Chequers - Orwell 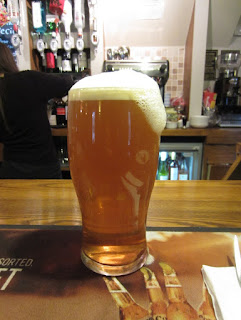 Their last pint of Buntingford’s Admiral – very hoppy and a proper bitter. 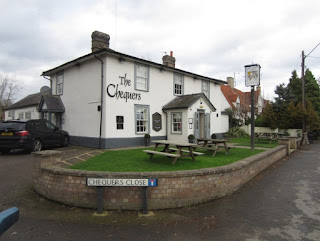 The food of course is as good as the beer.

The chef is the gentlemen from Hong Kong. Last visit tempura was on the menu, this day duck with Hoi Sin sandwiches!