White Chimney Woods (Kent group) Saturday 25th March at White Chimney Wood Beneden Kent
This was billed as Gadget day – to make anything you want and as usual using the resources of John Burbage’s wood.  There were groups making  chopping blocks with Romanian legs, stools, gypsy pegs (Harry did the demonstration). Amy Leake and Barster were making a shelter for Kent show. 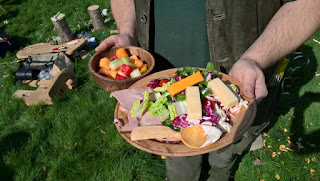 Paul’s healthy lunch – that’s where he gets his boundless energy and enthusiasm. 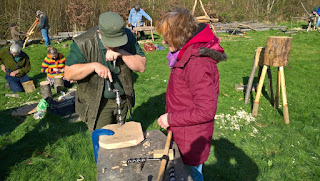 Nancy Bertenshaw was making a stool under Paul’s guidance. 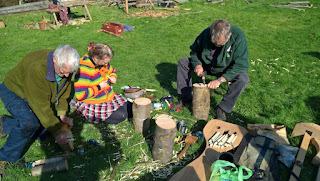 This was post Harry’s peg making demo – they were all at it. It remeinded me of a demo from Peter Jameson –I think there were traditionally seven steps – the seventh being able to find someone to buy them! 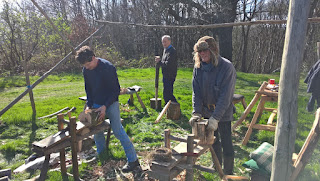 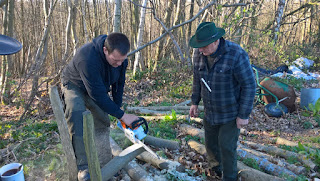 Dave Duke on the chainsaw – not sure who the other person was but he was fortunate to have some one to one with a very knowledgeable forester. 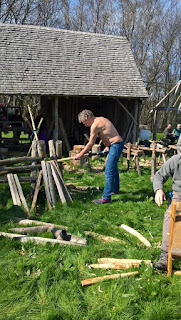 I was making a standing chopping block for bowl making – it was warm and sunny and I needed to get the tan going again. Using a Veritas  1 ½” rounder. 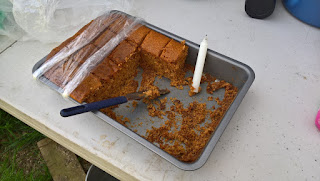 Once again Mr Burbage was a very generous host, thanks also go to Phill Piddell who helped with the organisation.
Posted by Unknown at 10:42