Townings Farm has a great farm shop and they sell their own as well as local produce. This is the second year for the Sussex group. There was a lot of old farm equipment and some interesting saws – 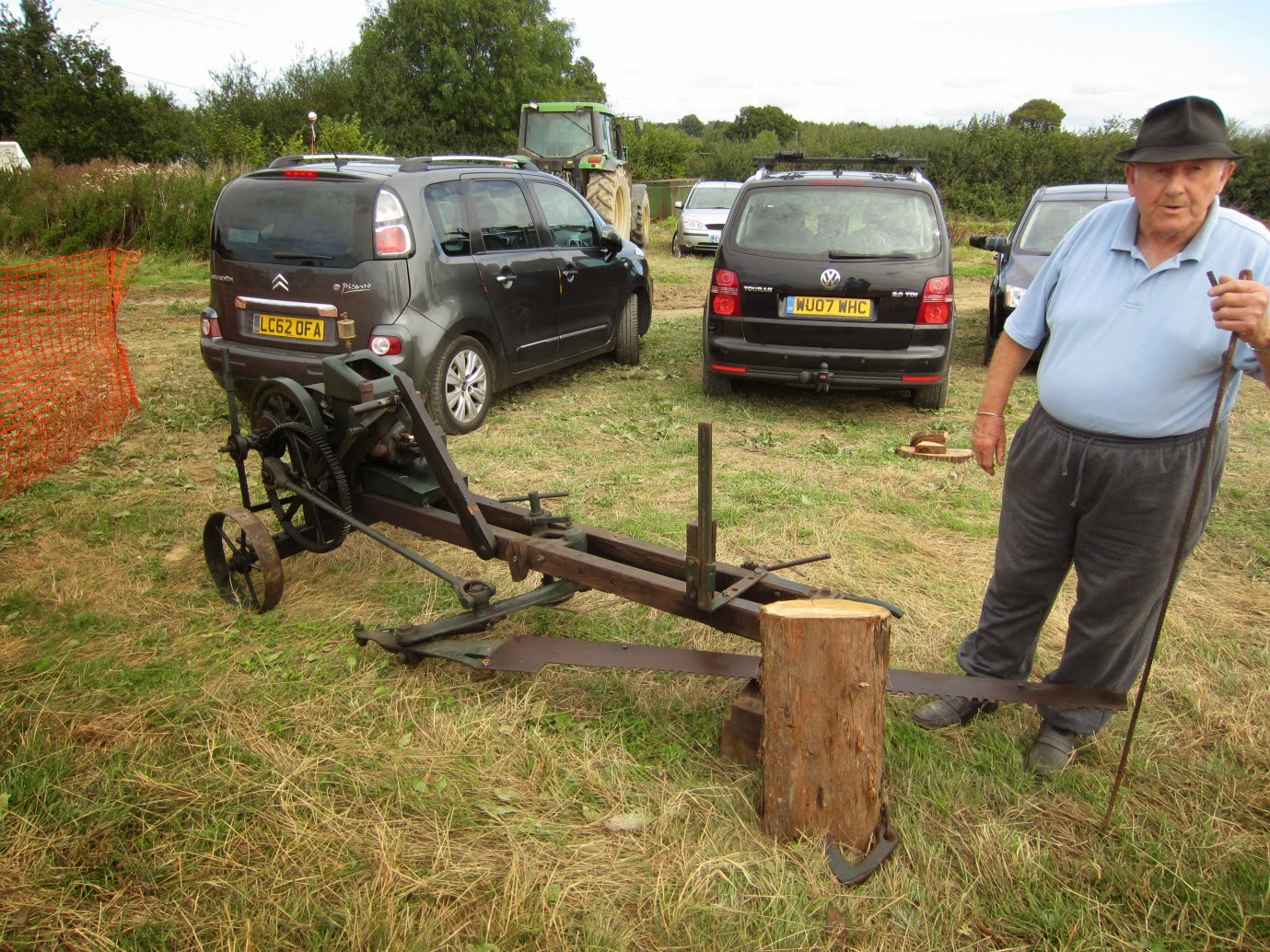 This is a Witte drag saw that will fell trees leaving a 2” stump. They were originally fitted with a 16’ blade for cutting redwoods!
Designed for one operator who pushed the saw into the woods – the handles are obscured by the log in the picture.

The blade on this machine was for cutting stone 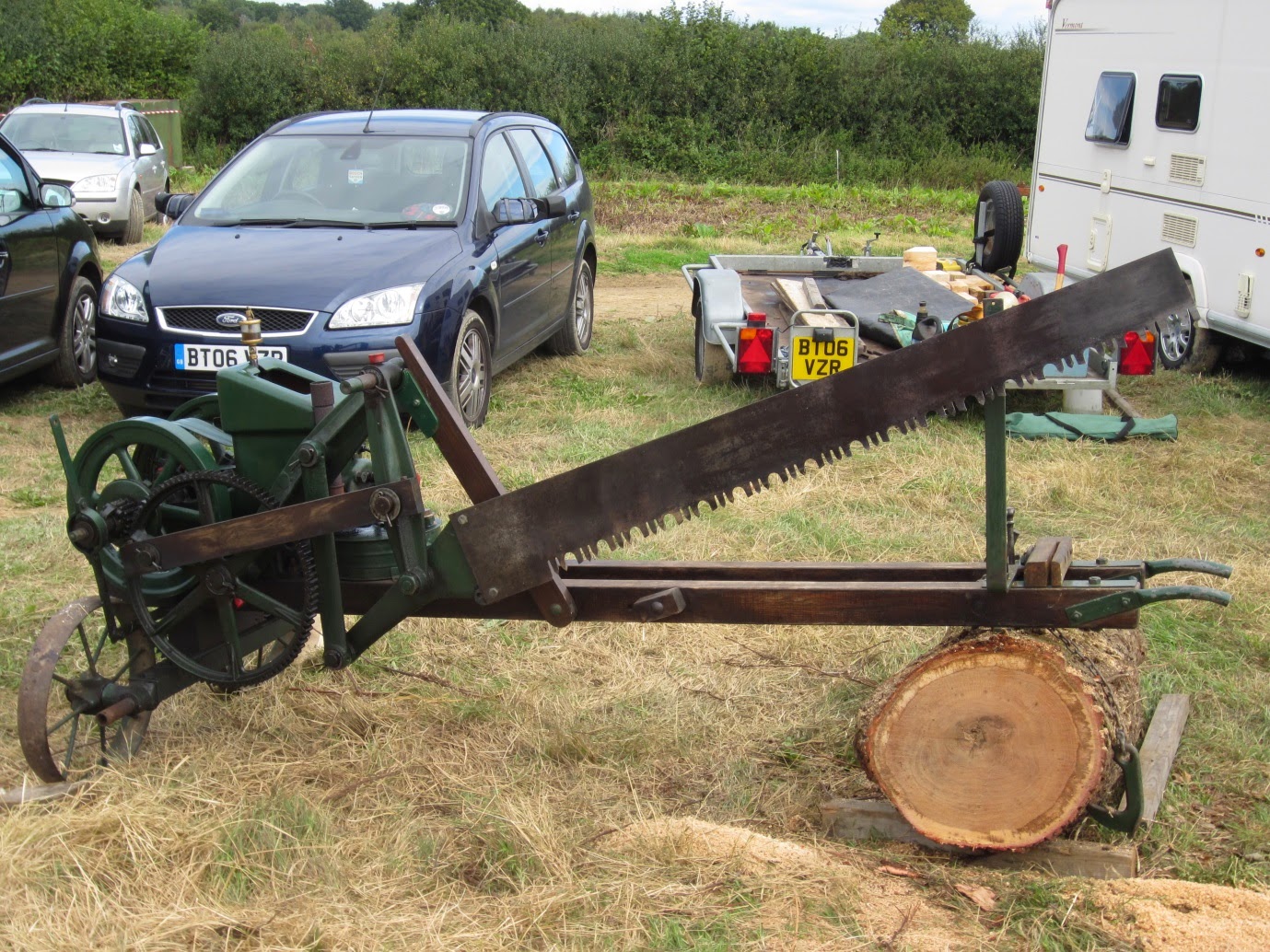 Another Witte saw but set-up for logging, this time you can see the carrying handles on the right. 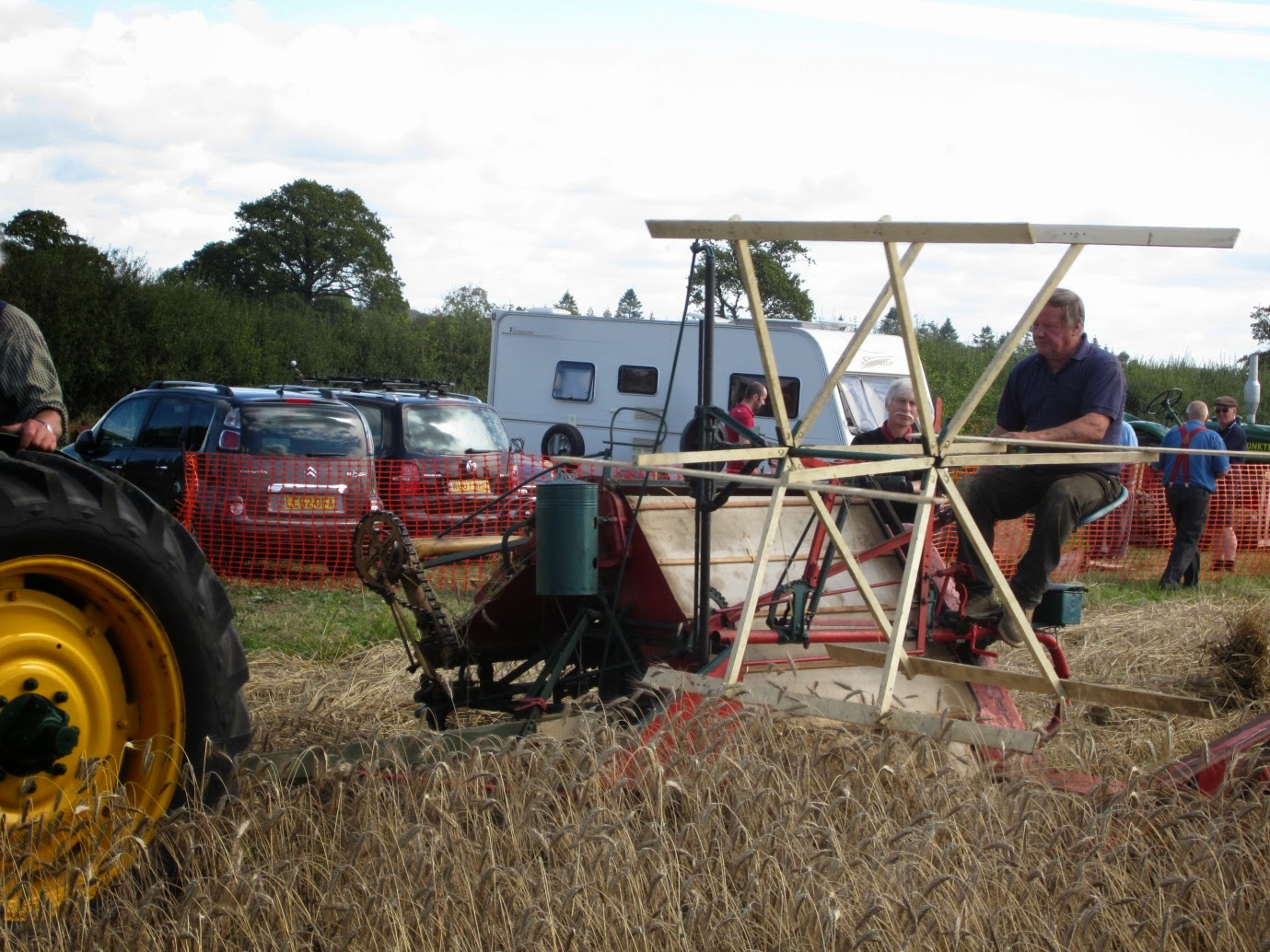 It’s a Binder second machine after the scythe. First was a reaper that cut and left lumps of cut corn on the ground which then had to be tied by hand using stems as the binding material.
A binder makes sheaves and then they are put into stooks  ready to be carted.
When binders were in general use the crop would have been much greener than you saw last weekend, cuts the grain loss going through the machine. Stooks so I understand had to have three church bells rung before carting.
I did not get invold with binder only chasing rabbets as the middle of the field was cut. Had to work bagging off on our first combine when I was 13 excused picking up sacks too small, though I had to handle them on the machine by end over end 1cwt per sack (50k)

I Met David Fowler who is a local chair cane / cording / rushing man. 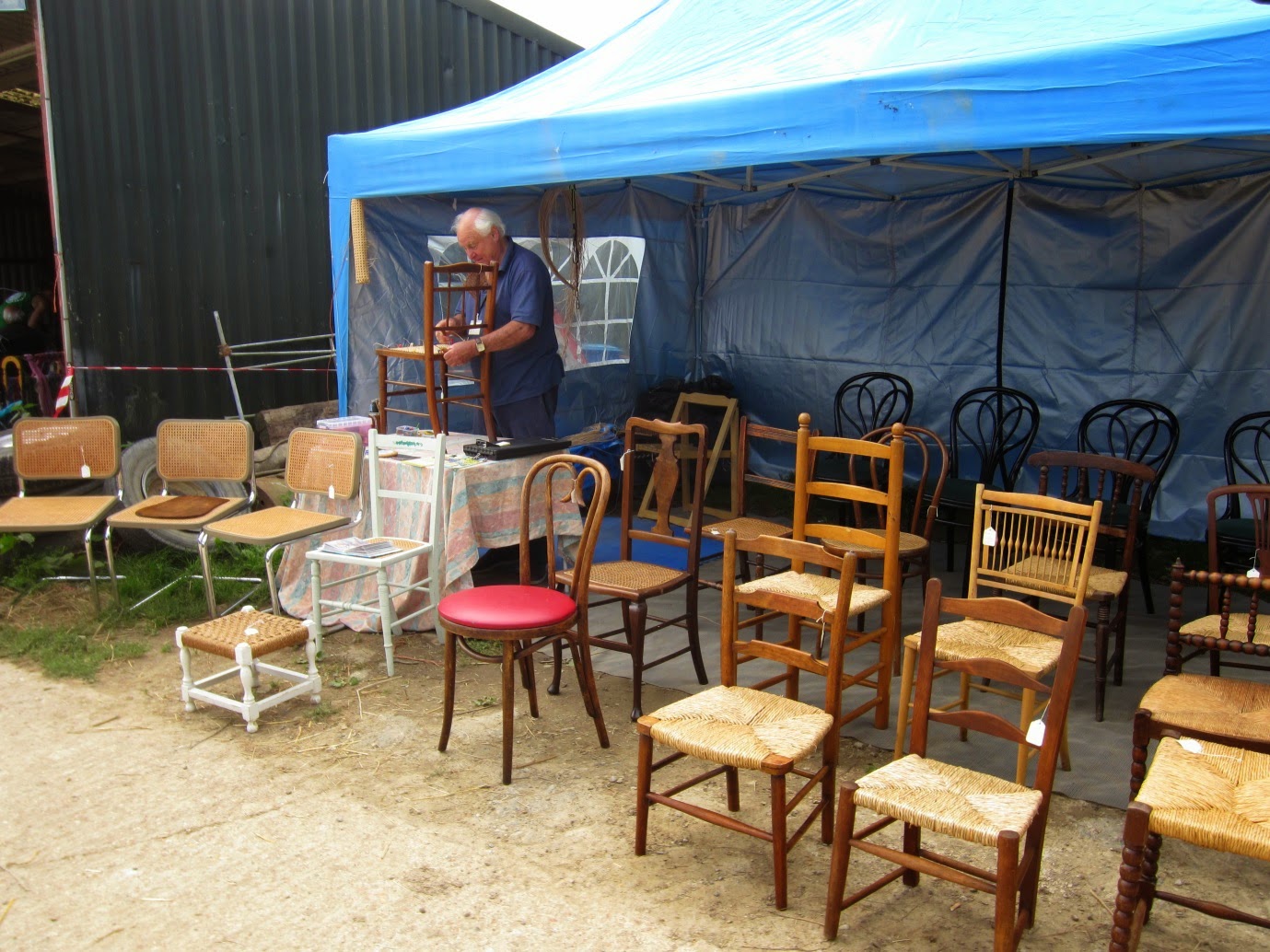 He does not advertise or use the web.

He had some pictures (shown below) of an Orkney crofters chair designed to insulate the user from the harsh conditions.

The back appears to be made of grass but as he said they probably have a local name for the material. 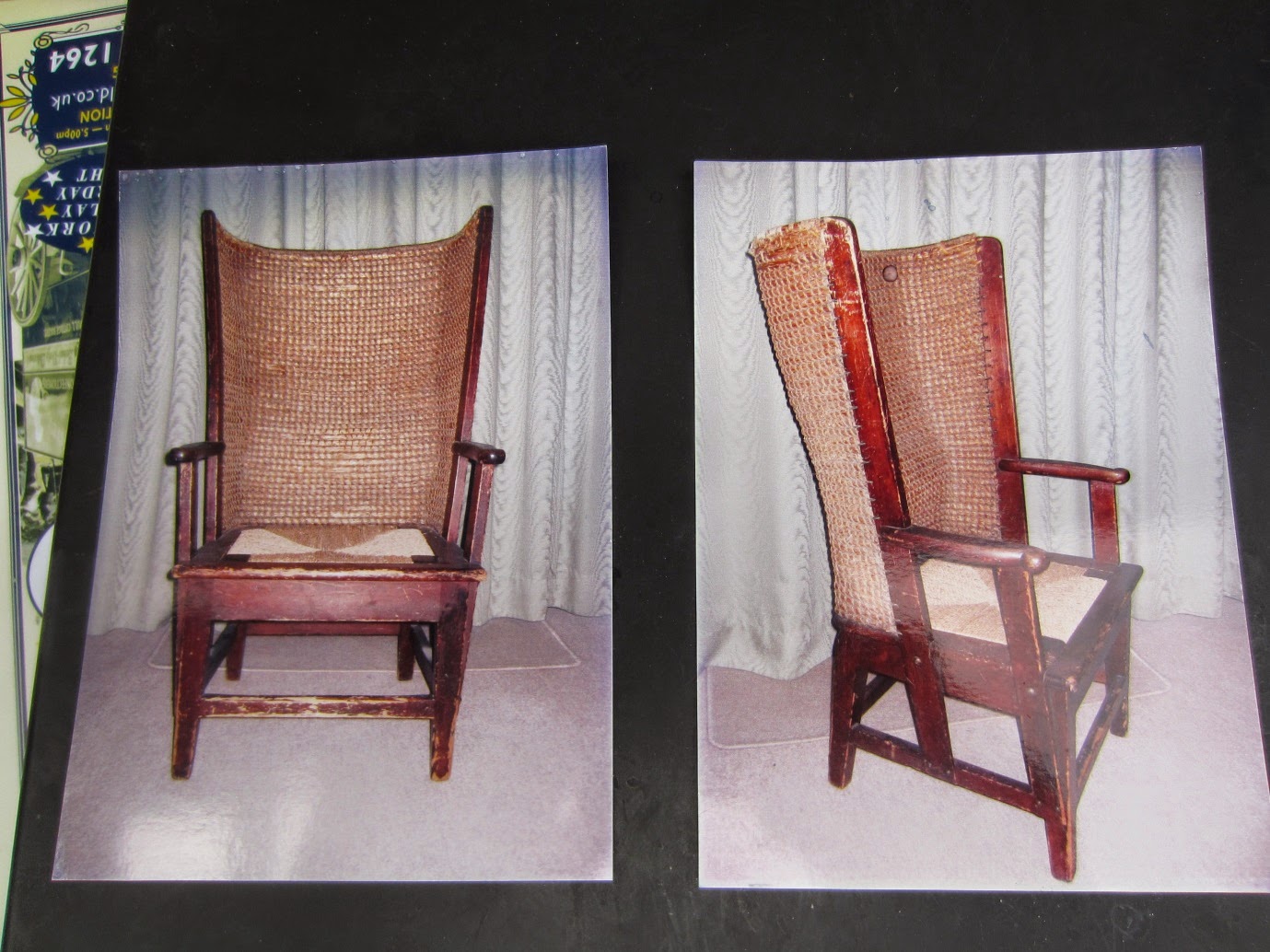 I have since Googled the chair and they say it was originally totally straw and some had a hood as well.

Nancy was trying out an idea for a ball event next year. 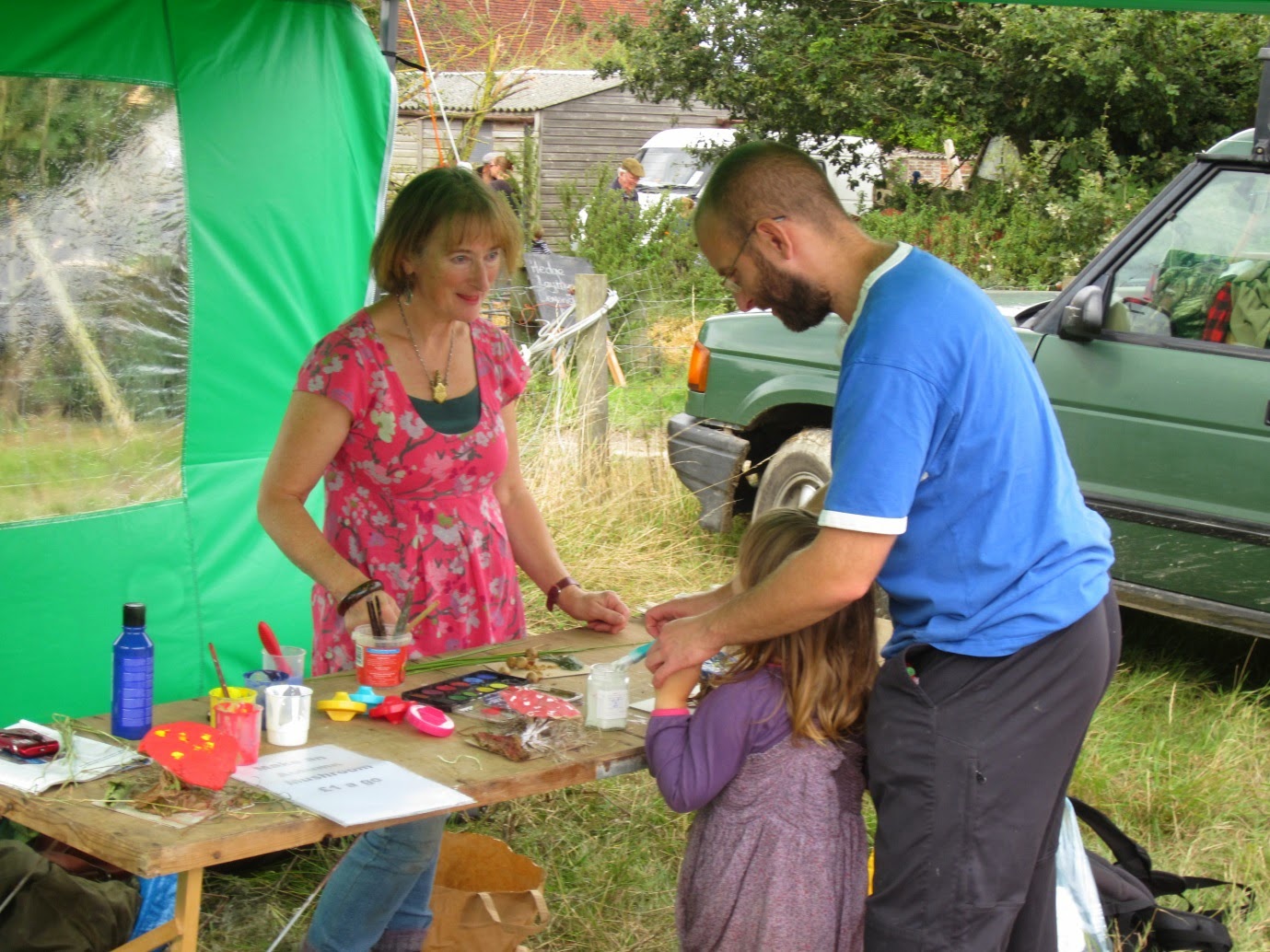 If you remember she was one of the people successfully encouraging our youngster’s to make nettle string this year at Herstmoncaux.

If you wish to help with this sort of activity next ball then contact the organisers - clive.robinson@w3z.co.uk 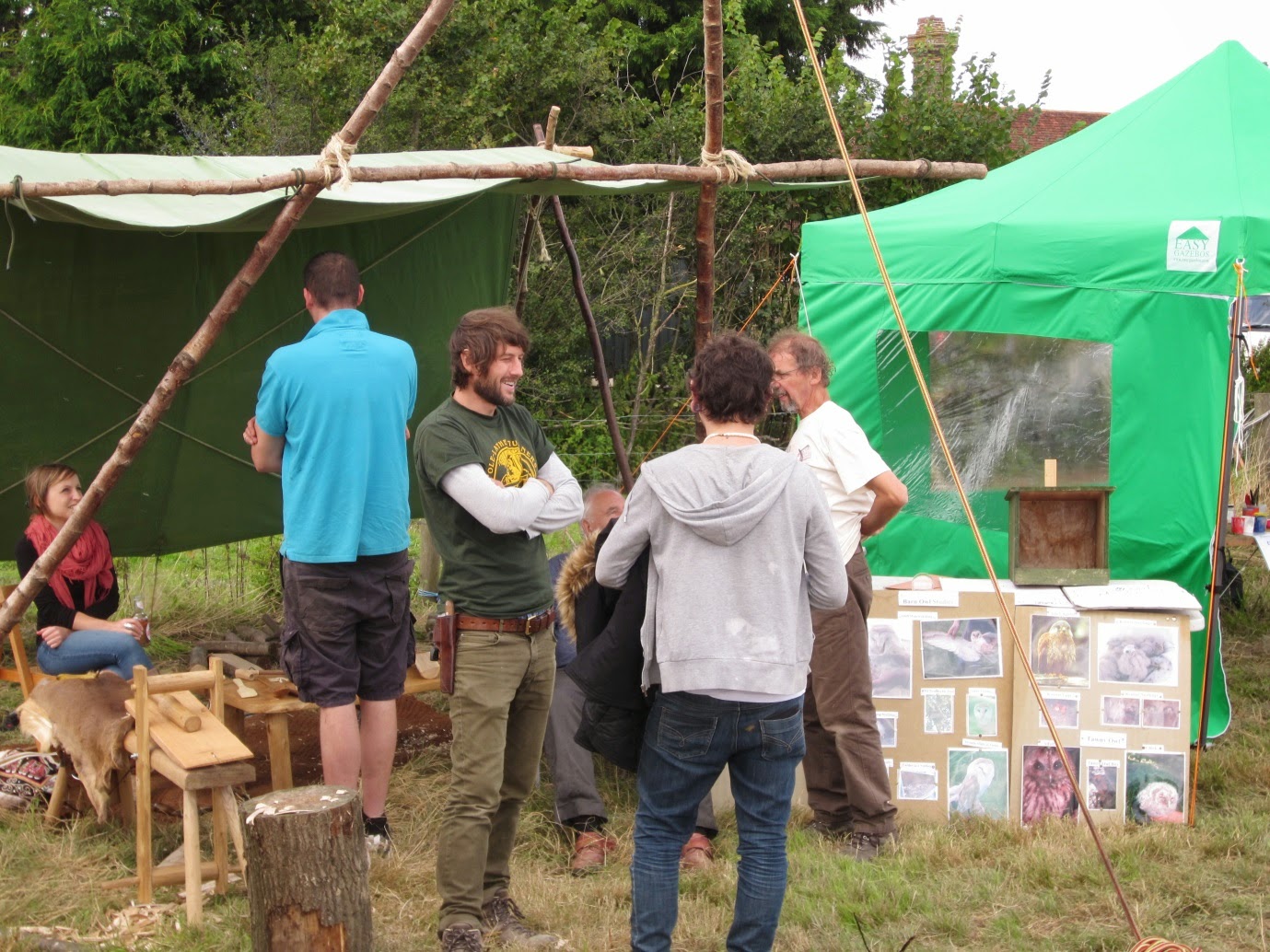 He was wearing an APTGW tee-shirt I have not seen yet – it had a serious logo on it. Must get one.

We were very happy to learn that he is also a deer stalker.  We had venison steaks for lunch!

His venison is for sale in the farm shop and as he pointed out there is a big difference between wild and farmed meat. 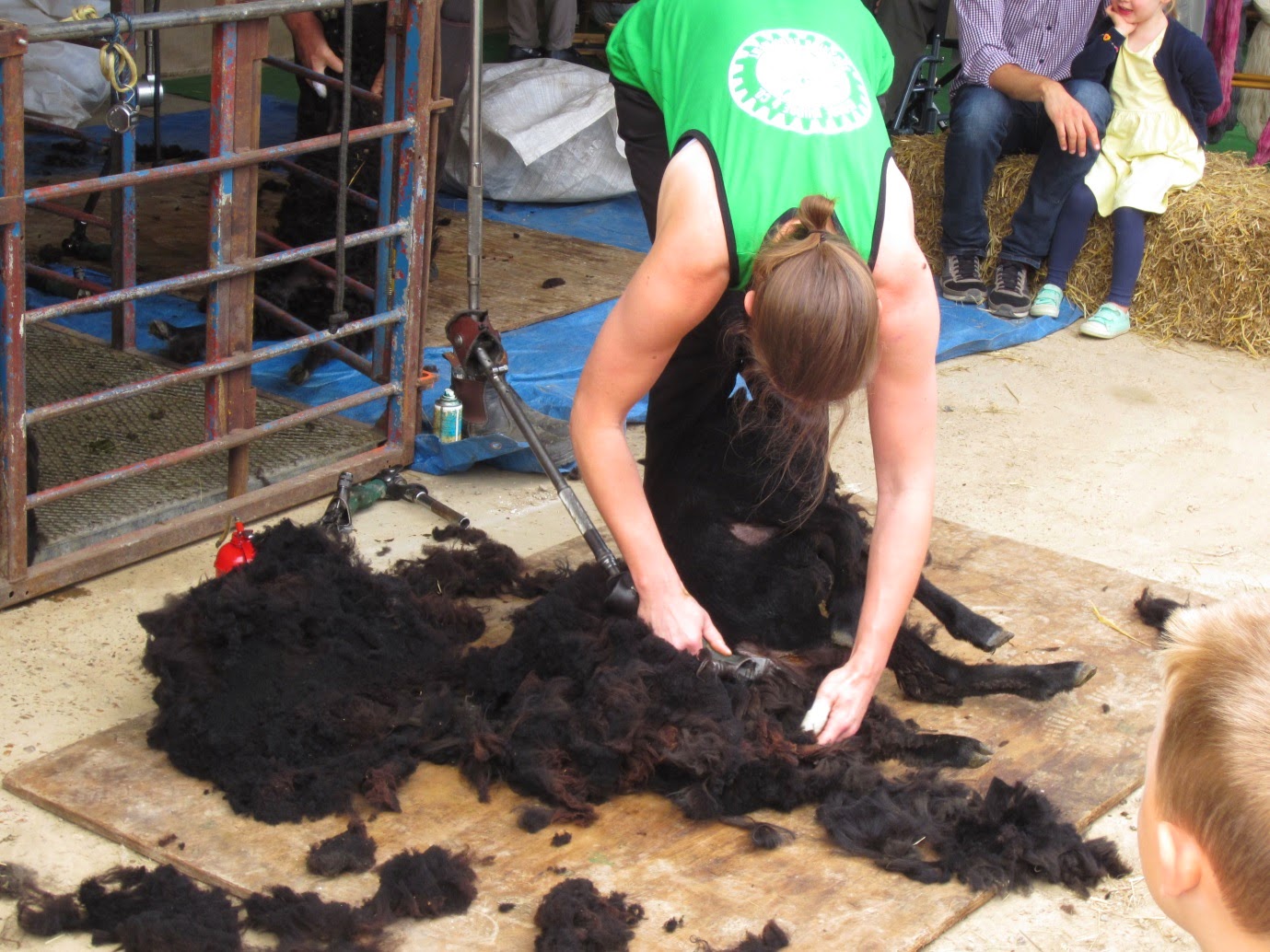 The sheep shearing was a crowd puller 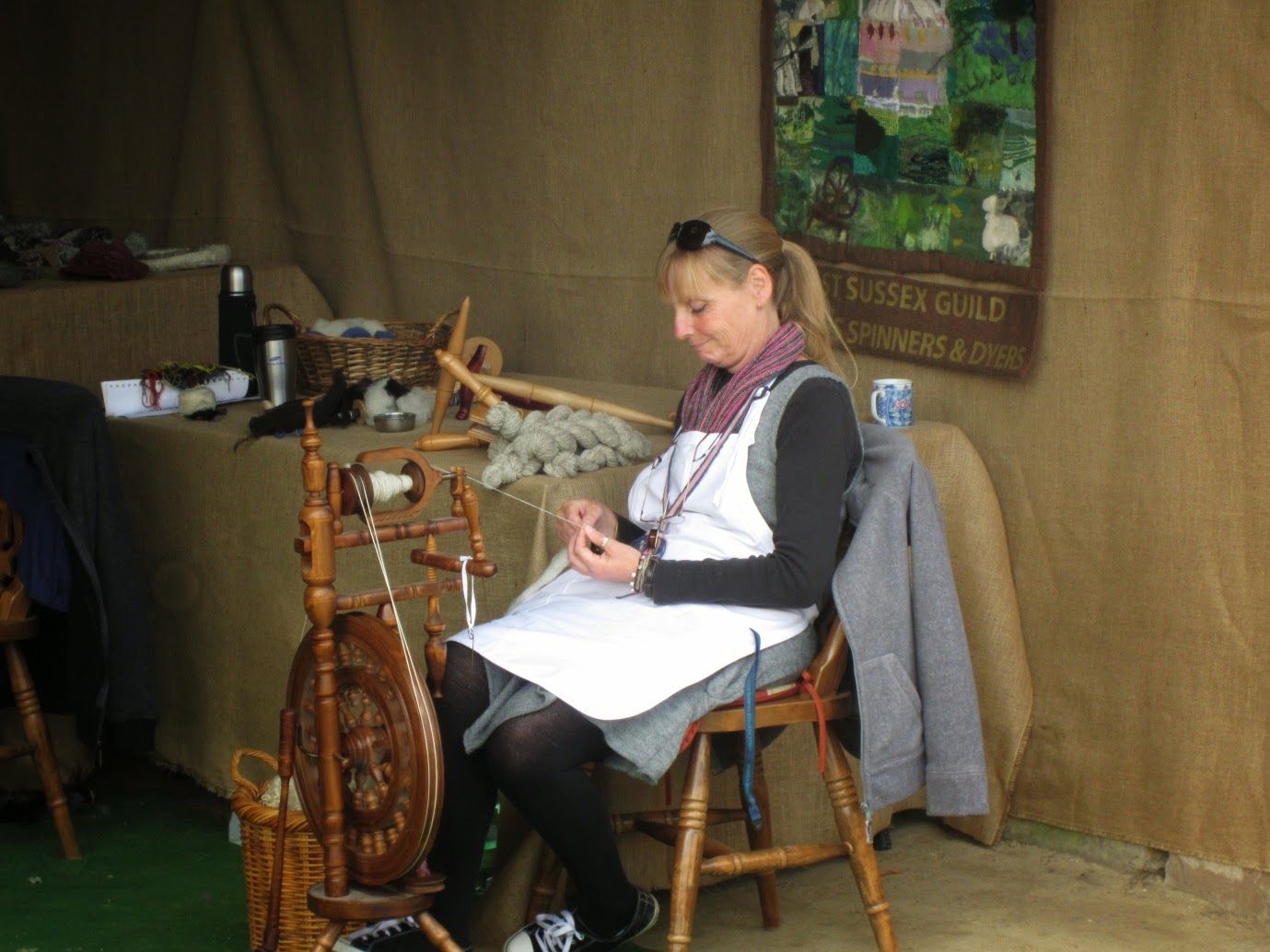 and the West Sussex weavers, spinners and dyers group were next door. 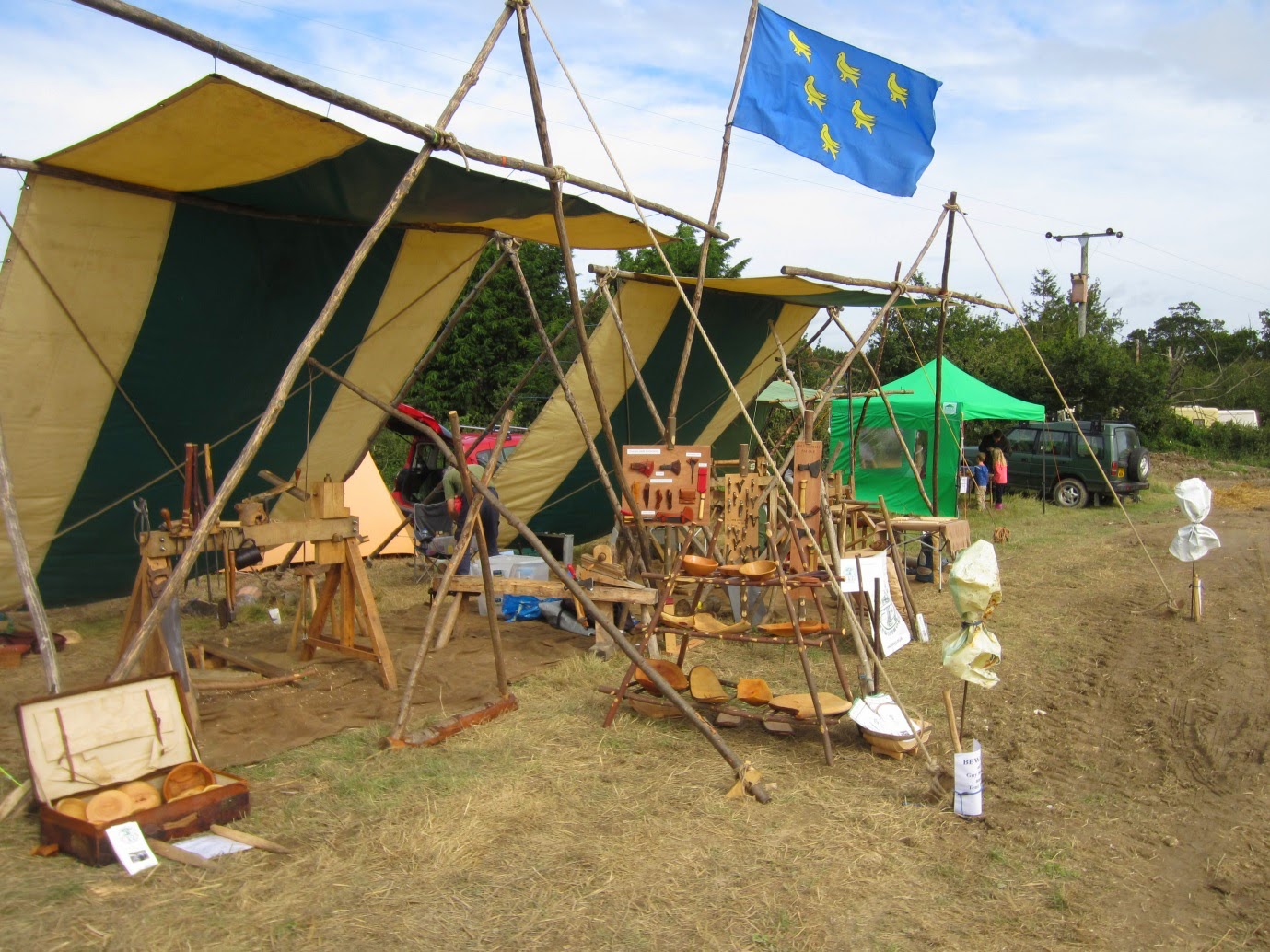 At last the Sussex stand, no one to be seen – perhaps they were all at lunch.

The county flag may have scared off the  locals.

I did suggest to Mike about charging for the have a go sessions – the public were paying for every other activity!

Thanks for the invitation Fionn.

If you wish to join the Sussex group then contact fionn.t@zen.co.uk