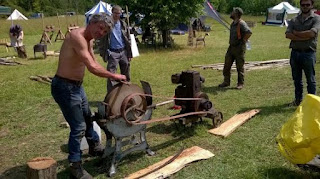 Simon was of course the top man at this event and always willing to entertain he treated us to yet another acquisition – this diesel powered water wheel. 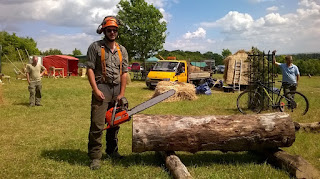 Simon decided to have an oak stake off. Make six fencing stakes. 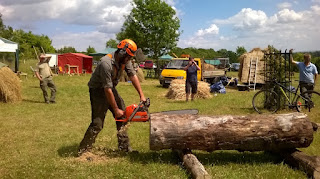 Chainsaw versus pure muscle and a few wedges and the odd sledge hammer. 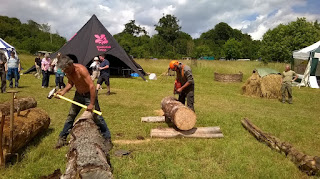 Now halfway through it almost looked like neck and neck but Simon came through s clear winner albeit totally wiped out! 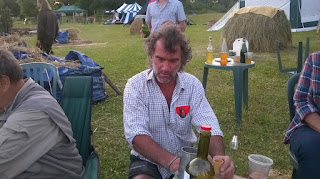 The cider making competition was held on the Saturday by Simon’s friend and although I rather fancied the challenge this guy was rather good at it and very entertaining. I though you just to drink it all. 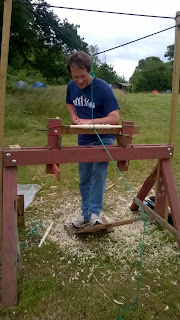 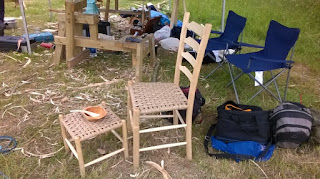 You may well remember Tony Hague – winner of the tool competition at the Ball this year. Well he is still at it with all this lot below! 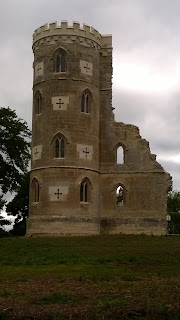 We were next to folly – some of which has been restored to its former glory. 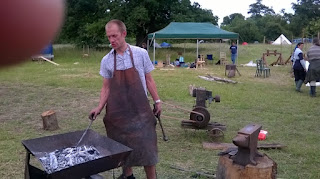 I suspect this was Simon's forge with a visitor doing rather well with a small charcoal fire. 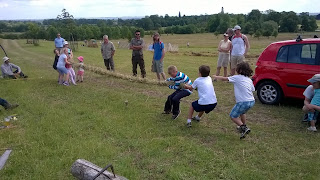 This was a junior tug of war with a hay rope. 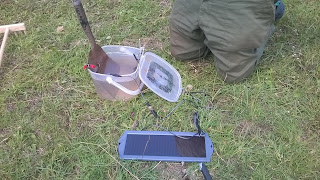 Andy Marczewski has been playing again – this is his solar powered rust remover. Note the shovel anode bicarb. electrolyte and solar panel – I find a generator and an angle grinder with a wire brush 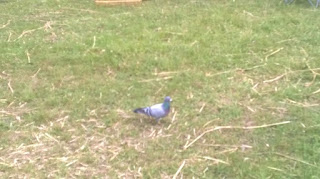 Now this must be the worst picture I have ever posted. Obviously a story here – it was found unable to fly with some sort of thread wrapped round both feet. We managed to cut it all off and it then flew onto Harriot Sprigs shelter to recover. It never went away – probably followed someone home. For my sins the only shot of Harriot’s setup.
Tillie was demonstrating on the pole lathe – please note the angle of the poles which reduce the angle on the work making it more efficient.

Another great weekend at Wimpole – all thanks to mainly Simon Damant and all his NT volunteers. Nearly forgot to mention the acrobatic display from a Spitfire on Sunday.
Posted by Unknown at 14:07