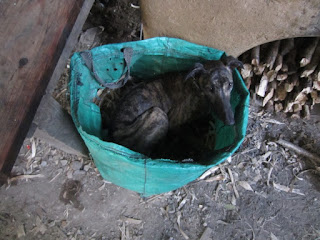 Twig (Roy Henderson’s dog) was sitting in a bag of twigs largely to keep warm. On the basis that all the firewood is slightly damp, Twig was actually helping to dry it out. 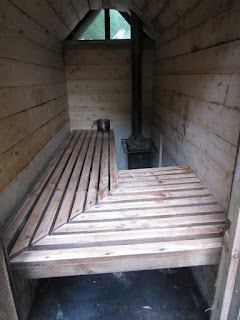 Someone, who cannot be named for legal reasons set fire to the mobile sauna. My first job was to complete the replacement of the internal lining and then refit the stove and benches.

It does get warm working inside an insulated box! 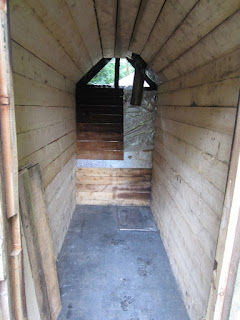 Job done, now ready for testing. It took some time to dry the inside out before it got up to sweating temperature. 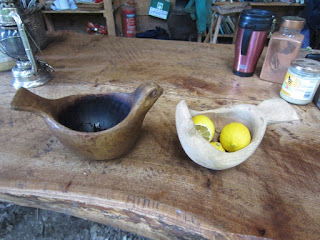 A pair of pretty bird themed dishes nesting in the kitchen. 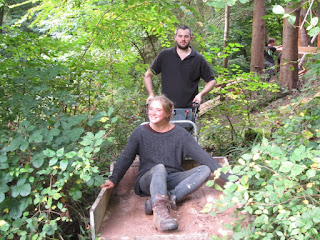 Jane, who was just back from another Swedish trip being given the royal treatment in the power throne by Tom Hawken.

She is still experimenting with tanning and now using Oak bark.. 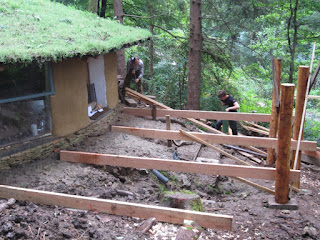 The large roundhouse is all but finished so the veranda was the next logical step.

All that digging is young men’s and women’s work. It’s great to see local materials being used so close to where they were growing. 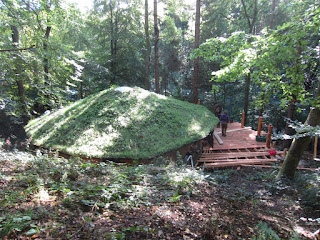 Great shot from further up the slope of the roundhouse a couple of days later with the deck largely in place and people working on the steps. They are a very talented bunch led by the apprentices Fionn and Harry. 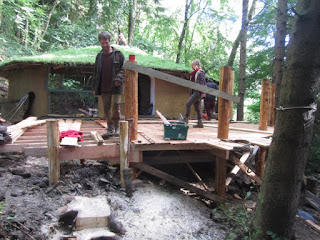 Lloyd, another ex-apprentice also helping out on the deck. 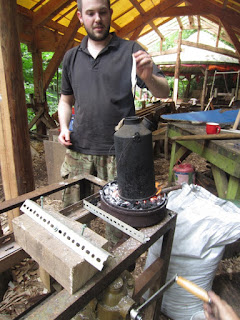 High speed kellykettle on the forge.

This setup belongs to Kirby (ex-apprentice) who bought a brand new hand cranked blower ex Russian army for £30! – the postage was £40. 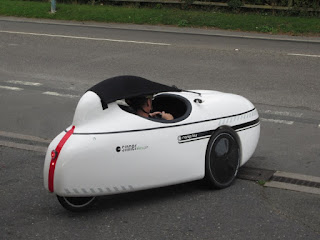 Whilst out on a beer run, I ran into a

charming man in what I thought was a modern Sinclair C5. It was really just an enclosed tricycle with a power assist for hills. 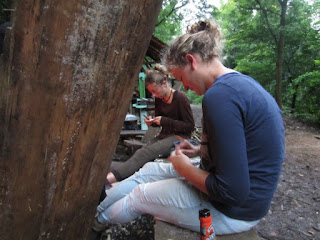 The volunteers are getting younger and are travelling further. Jasmin (on right) was from Holland and has been travelling for some time.

Ono was back again (no picture) also from Holland. 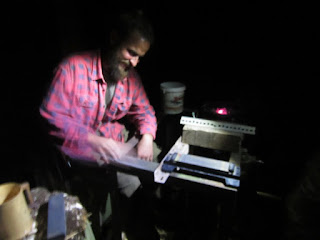 Jacob Lambert from Essex (one of the musicians) was burning the midnight oil learning how to sharpen.


His three mentors unfortunately gave him three different definitive methods of doing this.  He had the good sense however to politely ignore most of our advice and just get on with it.

Earlier in the day I mentioned Pin Mill at Aldeborough which is a tidal mill I had visited whilst attending Sutton Hoo Craftega event. I watched kingfishers working the shoreline. Which prompted some discussion and this quote from Phrase Finder. 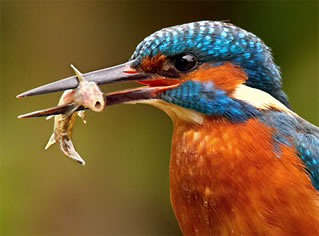 The Halcyon is a bird of Greek legend and the name is now commonly given to the European Kingfisher. The ancients believed that the bird made a floating nest in the Aegean Sea and had the power to calm the waves while brooding her eggs. Fourteen days of calm weather were to be expected when the Halcyon was nesting - around the winter solstice, usually 21st or 22nd of December. The Halcyon days are generally regarded as beginning on the 14th or 15th of December.
The source of the belief in the bird's power to calm the sea originated in a myth recorded by Ovid. The story goes that Aeolus, the ruler of the winds, had a daughter named Alcyone, who was married to Ceyx, the king of Thessaly. Ceyx was drowned at sea and Alcyone threw herself into the waves in a fit of grief. Instead of drowning, she was transformed into a bird and carried to her husband by the wind. 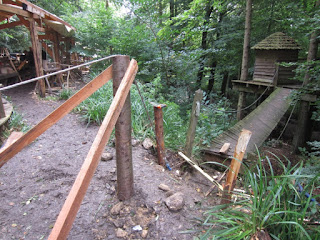 Back to cherry Wood -

Tom and Roy were re-stringing the steel cables holding up the suspension walkway to the composting loo in the trees. 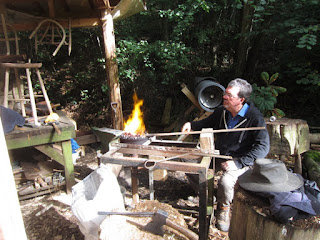 I had the good fortune to team up with another retired D&T teacher also called John. He was from Bradford but originally from the South. We were using that lovely forge, local charcoal to make some repairs to the treadle on the water grindstone. 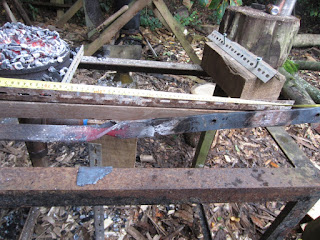 We made a punch from an old chisel first and then punched the holes. Finished off with a twist as a footrest. 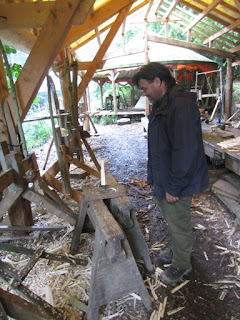 For once Alex was not making charcoal or cooking our dinner. Tine making or it may have been dowels for the team making and fitting out the new hand tool storage unit for the new workshop. 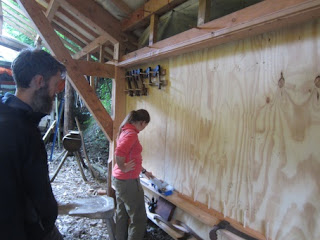 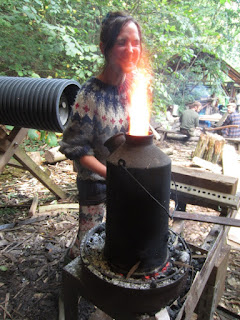 The stand in Chef Katie was also using the high speed Kelly kettle.

This Lady was making this cooking thing look far too easy – how do they do that? 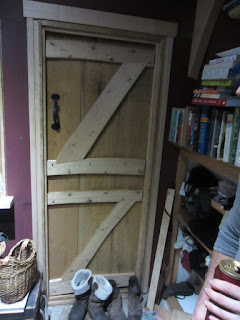 I visited Ollie and Lillie Weight, both ex Cherry Wood apprentices. They had a recent addition to their family, a beautiful baby Poppy!

They live in Box in a really comfortable Yurt – all their own work. This door is typical of the attention to detail and the creative flair in everything they make. 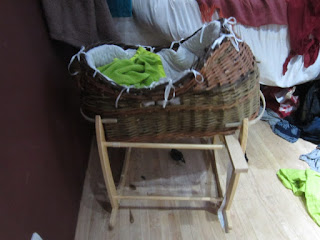 Lillie made the basket for the crib. 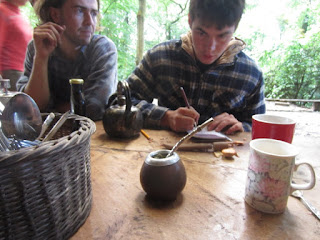 Hugh Rose with his work partner. Amongst many other things he carves avocado pips into some sweet little pendants – can’t wait to have a go at that – do enjoy a new material.


The round object with a metal drinking straw is a Bombilla gourd and he is drinking Yerber Mate tea, both  from Argentina. 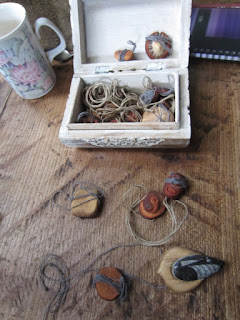 They have both started a tree house project – their local timber merchant is Justin Haywood!

Another great project week! They are held twice a year. If you want to spend some quality time with some old and young minds then this is paradise. Check out the website. Thanks Tim!
Posted by Unknown at 10:36