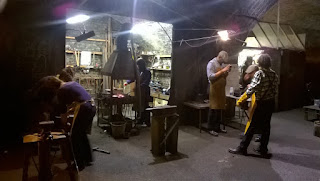 This activity used to be run as part of the Adult Education setup by the London Borough of Newham.

It is now run as a club £180 per term for 10 weeks for three hours. Materials and consumables included (within reason). 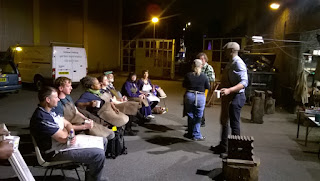 The enrolment is still factored by the Adult Learning Zone. It is run by the same very successful team Sean Marshall and Alan Chadborn. I had a very interesting conversation with Sean about running a tool making workshop in parallel or at another time during the week. The costings would be the same but compared with other tool-making black smithing courses this would be much better value.

I am of the opinion that the shorter one or two day courses do not give you any real skill, this takes time which is why I would favour a longer 10 week course. Not so good if your not local - but one of the gentleman on my course for a couple of terms lived in Oxford. You can always visit them before you commit - Monday Afternoons and evenings.