Summertime I spend some time with the Sussex group, well it’s the most forested county in the UK and probably has the most active group. 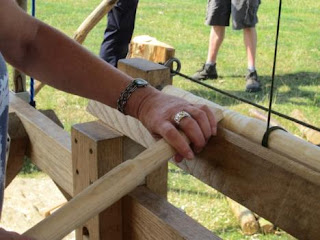 Fionn had another good idea with this wooden gouge, he uses it to train budding pole lathers to acquire some basic tool control without cutting through the drive cord along the way. 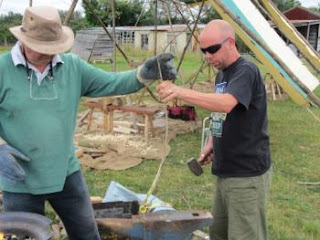 James was playing with his home made forge made from a lorry wheel and driven by an old stair hoover, it was very quiet. He was using gleaned small charcoal. Everybody appears to be catching the smithing bug.

Will we be expanding our membership to encompass another traditional craft at some time in the future? 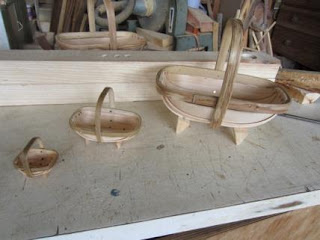 Richard Bingham our host, well known trug maker (amongst other things) showed me a range of small ones. Years ago his son used to make a few and earn himself some respectable pocket money.

Richard is due to be demonstrating August 2014 at Singleton (Wield and Downland Museum). He also runs trug making courses so, go on one. 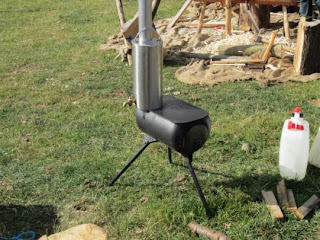 Fionn now has a modern samovar in stainless steel.

Larger fuel area, easier to maintain, without constant feeding of very small material – does however mean you would have get a little more organised and take fuel, not just relying on forest litter.


However this picture is of a home-made stove. James bought the stainless water jacket kettle and made the rest from a gas bottle. If definitely works I cooked some lunch on it. The legs slot into sockets to make it more transportable. I do notice that James now has to pull a trailer to carry his stove, forge, anvil… 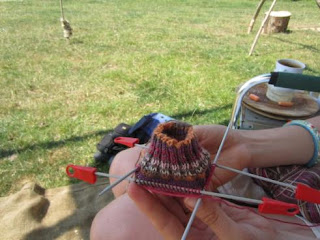 Mrs Julia Pumfrey was knitting some socks for her father, havn’t seen anyone knitting for ages. Now she had some multicolour wool and I just could not work out how the pattern worked out so well (perhaps the pattern and the wool was a kit. 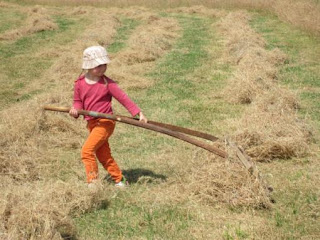 Amy Leake was camping with her children and her young daughter Josie was out in the fields getting a lesson in hay making from Richard, as were the rest of the bodgers. The light weight rakes were made locally from willow with square tines.