Richard Andersen has started the group in a walled garden at Barton Hill.
When the vicarage was sold it was agreed that the garden be used for community projects. A food garden is well established on the site with some large poly-tunnels.
The roundhouse shown was built last year and makes a great storytelling environment as well as providing shelter. The cob walls with bottles and plastic panels let in plenty of natural light. If you have not seen Lloyd Khan’s shelter book then try to find a copy – it may give you some great ideas about shelter building.

I found an interesting drawknife with a maker’s mark I have not seen before – shown below. 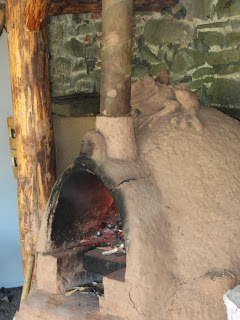 The pizza oven was unusual as it had a flue. Note the large frog on top. Zoe and the garden workers were preparing lunch. Perhaps I should have stayed and not gone to the Barley Mow with a choice of 30 real ales! 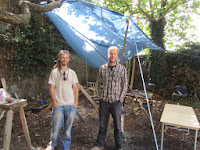 Richard and Tom have done a great job setting up the resources and were busy sorting out a good design for a break.
Posted by Unknown at 10:12