A blessing in the garden of Lilli’s godmother was conducted by Debs (Tim Gatfield’s partner), It started off in the sacred space under a huge tree, that Lillie played under as a child. Debs started by burning sage –a North American Indian purification ritual and claims the space invoking the four elements. North – is air for communication, East – is fire for courage, South – water for serenity and West – earth element for solid space and friendship.

The candle lighting started with them lighting their own candle and then jointly lighting one to signify union.


Then on to the Pagan Handfasting with the tying of ribbons. –

White - for a clean slate and Honesty, blue for fidelity, pink for love, red for passion and green for fertility and growth. The hands were traditionally tied for a day or even a year. 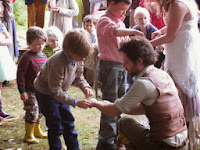 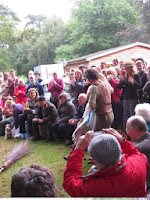 Bracelets were then given to them both to signify the ritual without the year long wait!
The jumping over a bessan broom signifies a clean sweep (broom made by Tim Gatfield) and jumping into a new life.

Feeding guests Romany style. This signifies expanding love into the community and also fuelling – by feed with grapes traditionally. In this instance it was by Hula Hoops as it was the ring used on the successful proposal. 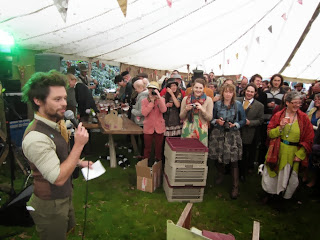 The groom’s speech – There was very little written on that card, but that did not stop Ollie making an excellent job of thanking his army of constructors who built toilets, bars, fires, shelters and the main marquee (well the tarp was bought but that was it). As well as all the thanks to their families and friends, who contributed to this occasion in many other ways.
Testament to the vision and influence of Tim Gatfield and his Cherry Wood Project. - Home of that army.
Roy Henderson (bronze plane maker – from earlier group report) made the gold wedding rings.
Someone buried a sheep the day before on hot coals, for the evening meal. The guests brought the lunchtime food banquet. This was a fabulously enjoyable and joyous wedding.